The song  is about a strong man, that just wants to be a father, but still takes his responsibility for his country by being a soldier.

Toby Keith is born 8 july 1961 in Clinton, Oklahoma.  He has sold 35 million records. 5 of the albums have reached the first place on the billboard top named ”Country Albums List”.

‘American Soldier’ is from the album ’Shock’n Y’all’ (2003). The song is about a soldier who is sent to war. He is prepared to die because freedom does not come free. The song is Keith’s way of thanking the U.S. troops. The song topped the ‘Hot Country Songs’ list for 4 weeks in 2003.

In the song “American Soldier” Toby Keith sings like he is the soldier. In real life he has never worked as a soldier, but he is a great supporter of the U.S. military.

The 1st verse tells us WHY he chooses to be a soldier. We hear about a man who tries to be a good father for his kids and a good husband for his wife. He wants to be a good soldier. He is telling us how his life is, and what he is doing. He says that he doesn’t do it for the money and the glory.

In the 2nd verse he repeats in various ways that he is determined to do his job as a soldier, no matter what it will cost.  Toby  Keith sings:
“I will always do my duty”
“I will bear that cross”
“I will proudly take my stand”
“I will always do what’s right”
He also says he has counted the cost. He understands that his job can lead to death, but he’s still stands firm on his choice. 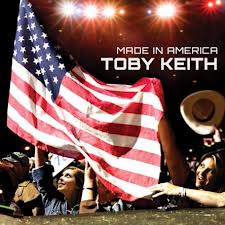 I think it is important to have a song like this, because soldiers can often be depressed, for they see so much pain. People are being killed and wounded. The soldiers are long away from their families. If something happens, they can not get comfort from their family and friends. Then this song comforts them and helps them to hold on. They are reminded of why they are soldiers. I think that soldiers like this song very much. The song inspires them to defend the country.

LYRICS – American soldier by Toby Keith
I’m just trying to be a father
Raise a daughter and a son
Be a lover to their mother
Everything to everyone Up and at ‘em, bright and early
I’m all business in my suit Yeah, I’m dressed up for success
From my head down to my boots
I don’t do it for the money
There’s bills that I can’t pay
I don’t do it for the glory
I just do it anyway
Providing for our future’s my responsibility
Yeah I’m real good under pressure
Being all that I can be
And I can’t call in sick on Mondays
When the weekends been too strong
I just work straight through the holidays
And sometimes all night long
You can bet that
I stand ready when the
wolf growls at the door
Hey, I’m solid, hey
I’m steady, hey,
I’m true down to the core